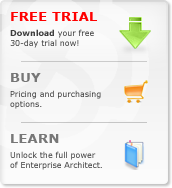 In its 15 years of continuous development, Enterprise Architect has become the pre-eminent visual modeling platform, bringing together all aspects of the development cycle. Its feature-set has evolved to provide traceability, from the initial design phase through to deployment, maintenance, testing and change control. Version 13 delivers significant new capabilities in these areas in a fresh, new, agile interface.

The user interface has been streamlined, based on the modern Ribbon style. "We think Enterprise Architect users will especially enjoy this new aspect of the UI - it provides a richer and more visually compelling platform," remarked Sparx Systems CEO, Geoffrey Sparks. "Given the extensive feature set and range of tools integrated into Enterprise Architect, the new ribbon based interface has proven a fantastic way, to expose both common and less familiar capabilities, in an accessible and visually appealing command suite."

Enterprise Architect 13, represents many years of research, consultation and development - working with a broad community of customers, partners and industry observers. This has helped make this release what Sparx Systems has identified as truly defining.

"One of the most striking features of the last few years, has been the steady growth in the number of widely dispersed teams, that need to access and contribute to a shared model design," remarked Sparks. "The need to involve a geographically dispersed team of modelers, domain experts, designers and other stakeholders in a timely and collaborative manner, has become a critical aspect of team dynamics." To address this imperative, Sparx Systems are offering a combination of distributed agile modeling and design, cloud based deployment, integrated project management and model chat to facilitate team-based communication.

The Kanban profile, originally introduced in Enterprise Architect Version 11, has been expanded, to display a more integrated view. As of Version 13, users are able to visualize team resource allocations, as well as task progress and other task-specific information. Kanban diagrams can also be established at the individual, as well as group level, offering different levels of oversight.

"A new modeling paradigm in Version 13, given the term 'Time Aware Modeling', allows end users to incrementally evolve a model and maintain a linkage between different versions of it," Sparx Systems COO, Tom O'Reilly commented. "It allows users to clone structures as a new version, to create 'As-Is' and 'To-Be' models. It's now much easier to trace between components, assess the impact of change, view necessary characteristics and otherwise understand how to merge model changes over time, without altering the underlying 'As-Is' model."

A key addition to Sparx Systems' established range of simulation targets, is the ability to develop highly complex and detailed models in SysML and have those (Parametric) models translated for execution in OpenModelica - an industry standard, open source mathematical simulation environment.

The combination of distributed agile modeling and design, cloud based repository, Kanban project management, simulation, software development, database engineering and hundreds more features and capabilities of Version 13, support even the most ambitious projects.

"Over the last one and half decades of development, the toolset has maintained its affordable price structure, further enhancing its value to teams seeking to involve numerous participants," O'Reilly commented. "With the new capabilities of this release, we've created opportunities to fast-track the development and integration of software - helping companies excel in this demanding era of technological innovation."

A full list of updates and enhancements in Enterprise Architect 13 can be found at: www.sparxsystems.com/ea13

In the past decade the Sparx user-base has grown from 30,000 to almost 400,000 individuals worldwide. Sparx Systems Enterprise Architect provides robust support for team-wide collaboration, and can scale up from single-user deployment to teams with dozens or even hundreds of collaborators - including remote collaborators. Sparx software is price competitive even when deployed across the entire development team. First developed in 1998, the Sparx Systems' Enterprise Architect modeling platform was commercially released in 2000, and has enjoyed more than 15 years of continuous development and growth.

All trademarks are the property of their respective owners.