The dynamic model is used to express and model the behaviour of the system over time. It includes support for activity diagrams, state diagrams, sequence diagrams and extensions including business process modelling.

Sequence diagrams are used to display the interaction between users, screens, objects and entities within the system. It provides a sequential map of message passing between objects over time. Frequently these diagrams are placed under Use Cases in the model to illustrate the use case scenario - how a user will interact with the system and what happens internally to get the work done. Often, the objects are represented using special stereotyped icons, as in the example below. The object labelled Login Screen is shown using the User Interface icon. The object labelled SecurityManager is shown using the Controller icon. The Object labelled users is shown using the Entity icon.

Activity diagrams are used to show how different workflows in the system are constructed, how they start and the possibly many decision paths that can be taken from start to finish. They may also illustrate the where parallel processing may occur in the execution of some activities.

State charts are used to detail the transitions or changes of state an object can go through in the system. They show how an object moves from one state to another and the rules that govern that change. State charts typically have a start and end condition.

A process model is a UML extension of an activity diagram used to model a business process - this diagram shows what goal the process has, the inputs, outputs, events and information that are involved in the process. 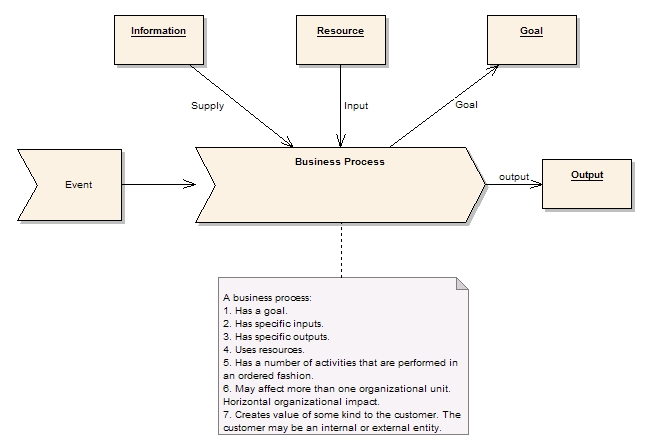