The class diagram shows the building blocks of any object-orientated system. Class diagrams depict a static view of the model, or part of the model, describing what attributes and behavior it has rather than detailing the methods for achieving operations. Class diagrams are most useful in illustrating relationships between classes and interfaces. Generalizations, aggregations, and associations are all valuable in reflecting inheritance, composition or usage, and connections respectively.

The diagram below illustrates aggregation relationships between classes. The lighter aggregation indicates that the class "Account" uses AddressBook, but does not necessarily contain an instance of it. The strong, composite aggregations by the other connectors indicate ownership or containment of the source classes by the target classes, for example Contact and ContactGroup values will be contained in AddressBook. 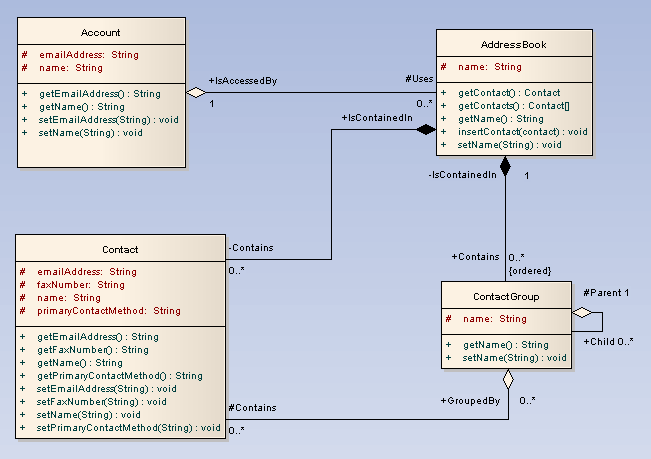 A class is an element that defines the attributes and behaviors that an object is able to generate. The behavior is described by the possible messages the class is able to understand, along with operations that are appropriate for each message. Classes may also have definitions of constraints, tagged values and stereotypes.

An interface is a specification of behavior that implementers agree to meet; it is a contract. By realizing an interface, classes are guaranteed to support a required behavior, which allows the system to treat non-related elements in the same way – that is, through the common interface.

Interfaces may be drawn in a similar style to a class, with operations specified, as shown below. They may also be drawn as a circle with no explicit operations detailed. When drawn as a circle, realization links to the circle form of notation are drawn without target arrows.

An association implies two model elements have a relationship - usually implemented as an instance variable in one class. This connector may include named roles at each end, cardinality, direction and constraints. Association is the general relationship type between elements. For more than two elements, a diamond representation toolbox element can be used as well. When code is generated for class diagrams, named association ends become instance variables in the target class. So, for the example below, "playsFor" will become an instance variable in the "Player" class.

A generalization is used to indicate inheritance. Drawn from the specific classifier to a general classifier, the generalize implication is that the source inherits the target's characteristics. The following diagram shows a parent class generalizing a child class. Implicitly, an instantiated object of the Circle class will have attributes x_position, y_position and radius and a method display(). Note that the class "Shape" is abstract, shown by the name being italicized.

The following diagram shows an equivalent view of the same information.

Aggregations are used to depict elements which are made up of smaller components. Aggregation relationships are shown by a white diamond-shaped arrowhead pointing towards the target or parent class.

An association class is a construct that allows an association connection to have operations and attributes. The following example shows that there is more to allocating an employee to a project than making a simple association link between the two classes: the role the employee takes up on the project is a complex entity in its own right and contains detail that does not belong in the employee or project class. For example, an employee may be working on several projects at the same time and have different job titles and security levels on each.

A dependency is used to model a wide range of dependent relationships between model elements. It would normally be used early in the design process where it is known that there is some kind of link between two elements, but it is too early to know exactly what the relationship is. Later in the design process, dependencies will be stereotyped (stereotypes available include «instantiate», «trace», «import», and others), or replaced with a more specific type of connector.

The trace relationship is a specialization of a dependency, linking model elements or sets of elements that represent the same idea across models. Traces are often used to track requirements and model changes. As changes can occur in both directions, the order of this dependency is usually ignored. The relationship's properties can specify the trace mapping, but the trace is usually bi-directional, informal and rarely computable.

The source object implements or realizes the destination. Realizations are used to express traceability and completeness in the model - a business process or requirement is realized by one or more use cases, which are in turn realized by some classes, which in turn are realized by a component, etc. Mapping requirements, classes, etc. across the design of your system, up through the levels of modeling abstraction, ensures the big picture of your system remembers and reflects all the little pictures and details that constrain and define it. A realization is shown as a dashed line with a solid arrowhead.

A nesting is connector that shows the source element is nested within the target element. The following diagram shows the definition of an inner class, although in EA it is more usual to show them by their position in the project view hierarchy.